CHICAGO, IL – Attorneys for the victims who have been sickened because they lived close to Sterigenics, a Willowbrook medical equipment sterilization company, spoke out on Thursday after the Attorney General’s Office and the DuPage County State’s Attorney submitted a consent order agreement with Sterigenics in the Dupage County Circuit Court that could allow Sterigenics to reopen its doors for the first time since being shut down on February 15.

The reopening was agreed upon by the Attorney General’s Office despite strong push back from the community and elected leaders. Sterigenics was shut down after authorities found it has long been emitting dangerous levels of the cancer-causing chemical ethylene oxide, used to sterilize medical equipment. Medical professionals agree and studies have shown that there is no safe level of ethylene oxide.

“This $300,000 slap on the wrist that the Attorney General’s Office has negotiated to repay the people of Willowbrook and the surrounding communities for years of Sterigenics’ illegal behavior isn’t enough to cover the funeral expenses of the innocent victims of this company,” said attorney Antonio Romanucci of Romanucci & Blandin, LLC, one of the law firms advocating for the victims of Sterigenics in a class action lawsuit. “Sterigenics say that we can only have sterilized medical equipment if we are willing to continue to risk the lives and health of those in the Willowbrook community. We know that ethylene oxide causes cancer. We know that it is unsafe at any level. We know that Sterigenics exposed tens of thousands of people, including elementary, middle and high school students and teachers who studied across the street, to ethylene oxide for years and never told them or gave them the chance to protect themselves. Sterigenics has forfeited the right to be in business anywhere, least of all Willowbrook. If they want to continue to sterilize medical products they must now turn to one of the many safer ways to do it or leave this community.” 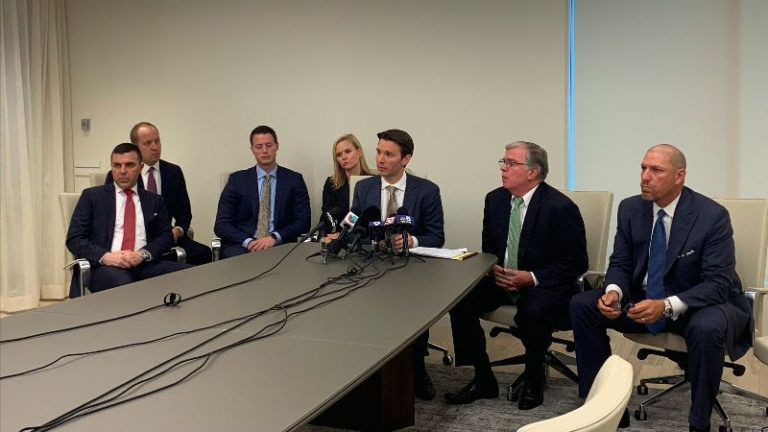 Victims suing Sterigenics for exposing them to elevated cancer risks though improper ethylene oxide emission control were shocked at the sudden move by the Attorney General’s office. It came just two days after the Food and Drug Administration announced a 2019 innovation challenge, which called for ideas for sterilization alternatives to ethylene oxide that the FDA would help develop. The FDA put forward the challenge in response to the groundbreaking ethylene regulating legislation of the Matt Haller Act, which passed in May in Illinois–a law which advocates thought would shut down Sterigenics for good.

“We are disappointed with this decision to go against the community’s wishes and the years medical and scientific consensus that ethylene oxide is harmful to inhale in any amount. No matter what papers they sign, Sterigenics and will put more lives in danger if they reopen,” said Colleen Haller, widow to Matt Haller, who passed away from stomach cancer earlier this year. “If they want to continue to be in the medical sterilization business, they can do it elsewhere or use any of the alternatives that the FDA and other groups have discussed. There are safer alternatives out there. People’s lives are at risk.”

“Sterigenics has had years to consider safer alternatives, but instead chose to use a deadly carcinogen and emit it into the atmosphere. Even during these last five months that they have been closed, they’ve had an opportunity to consider alternatives that would allow them to continue their operations without poisoning thousands,” said attorney Steve Hart of Hart McLaughlin & Eldridge, who also represents Sterigenics victims. “The continued disregard for the community, and the reckless abandon with which Sterigenics continues to push their narrative of needing to use this cancer causing chemical leave only one safe alternative: find a new location to conduct your business away from schools, homes, and thousands of residents, including children. The community has made it abundantly clear they do not want Sterigenics in their backyard any longer. If ethylene oxide is going to continue to be your trade, consider the health of thousands of residents and go elsewhere.”

Advocates, including plaintiffs represented by Romanucci & Blandin, LLC, Hart McLaughlin & Eldridge, Salvi, Schostok & Pritchard P.C., Power Rogers & Smith, L.L.P., The Collins Law Firm, P.C., Tomasik Kotin Kasserman, Corboy & Demetrio, P.C, Goldberg Weisman Cairo, and Dolan Law, as well as members of the community group Stop Sterigenics, and legislators, have vowed they will continue to fight back against Sterigenics, stop it from reopening, and hold the state accountable for enforcing the terms of the consent agreement. Advocates are also expecting new ethylene oxide standards that the Environmental Protection Agency has indicated that it will release soon. Pro-ethylene oxide organizations have spent hundreds of thousands of dollars lobbying the government against creating new regulations.

Video of the attorneys’ Thursday press conference is available here.

Romanucci & Blandin, LLC, Hart McLaughlin & Eldridge, Salvi, Schostok & Pritchard P.C., Power Rogers & Smith, L.L.P., The Collins Law Firm, P.C., Tomasik Kotin Kasserman, Corboy & Demetrio, P.C, Goldberg Weisman Cairo, and Dolan Law are providing support for individuals and families who are suffering from cancer, birth defects and miscarriages among other catastrophic injuries due to these carcinogenic emissions from the Sterigenics International plant in Willowbrook, Illinois. Together, the firms are fighting to hold Sterigenics accountable for the reckless negligence that has resulted in the needless and continuous poisoning of men, women and children in Illinois for so many years.