On behalf of the 29 undersigned organizations, we appreciate the extensive time and effort that Senate negotiators have undertaken in recent months to identify common ground on policies to advance police accountability for misconduct and improve transparency.

We write to express our serious concerns, however, about the state of negotiations on qualified immunity and empowering victims of police misconduct to hold law enforcement officers and agencies accountable through civil lawsuits. Last summer, the House was moved to pass legislation on police accountability when millions of people marched in the streets demanding recourse for police misconduct. Handmade cardboard protest signs imploring Congress to “End Qualified Immunity” became a familiar sight, amplifying the cries of the thousands who have experienced direct harm at the hands of law enforcement. Despite the clarity of this message, recent media reports indicate that the negotiations over the George Floyd Justice in Policing Act have been obstructed by a small number of law 2 enforcement groups that are using it as an opportunity to advance proposals that would continue to insulate officers from accountability when they violate the law.

Now, some policymakers involved in the negotiations are demanding1 that qualified immunity for law enforcement officers be codified in the bill. In addition, at least one Senator involved in the negotiations has suggested2 that only law enforcement agencies should be held liable—not officers—for the acts of their officers, and only in cases involving death and the most serious bodily injury, with no recourse for the victims of other forms of brutality; violations of First Amendment rights, including religious liberties; intrusions on privacy and dignity; sexual abuse; and other unconstitutional conduct by law enforcement that does not meet these narrow parameters. Both ideas are deeply troubling because they would threaten to permanently close the courthouse doors for victims of many of the most common forms of police abuse rather than provide a meaningful remedy.

I. Qualified Immunity Shields Law Enforcement from Accountability, and Congress Should Eliminate It Not Perpetuate Or Strengthen It Qualified immunity is a judge-made doctrine that is not grounded in the Constitution or any statute, and that provides law enforcement officers with immunity from suit and immunity from liability when they have committed constitutional violations.

Qualified immunity prevents officers from being held personally liable for constitutional violations, unless the violation was of “clearly established” law. This “clearly established” law standard is now such a high bar it renders it impossible to hold law enforcement officers accountable in many cases, leaving those who have experienced violence, sexual abuse, privacy invasions, property damage, and other misconduct by state actors with no recourse or prospect for recovering damages. These far-reaching impacts are why the House-passed

A recent police misconduct case is chillingly similar to the murder of George Floyd and illustrates the harm Congress would do by codifying or leaving in place qualified immunity. In August 2016, a Dallas resident named Tony Timpa called 911 in the midst of a mental health crisis, telling the operator that he had a history of mental illness and hadn’t taken his medication.4 Five Dallas police officers showed up. They restrained Timpa’s arms and legs with police cuffs, laid him in a prone position, and Officer Dustin Dillard kneeled on his back—for fourteen minutes and seven seconds. As Timpa’s cries of “you’re gonna kill me” turned into gasps for air, the officers laughed that his final breaths sounded like “snoring,” and taunted, “It’s time for school—wake up.” Even after Timpa went completely still and stopped responding, Dillard continued kneeling on his back for around three minutes. Before turning Timpa over to paramedics, Dillard commented, to more laughter from the other officers, “I hope I didn’t kill him.” Shortly afterward, the paramedics confirmed Timpa was dead.

When Timpa’s family filed a civil rights suit against the officers who killed him, their claim was thrown out because of qualified immunity. Notably, the judge did not find that these officers acted reasonably or in good faith. In fact, there was a prior case holding that officers who hog-tied “a drug-affected person in a state of excited delirium” and placed him “face down in a prone position” until he died by asphyxiation violated clearly established law. However, the judge held that this was not enough to meet qualified immunity’s “clearly established law” standard, because the officers in that prior case “employed hog-tying” but “Timpa was never hog-tied.” In other words, the different method of restraint officers used while asphyxiating the victim—handcuffs instead of hog-tying—was enough to deny any legal relief to Timpa’s family.

Qualified immunity is an affront to our legal system and to the pursuit of justice. The undersigned organizations urge the negotiators to adopt police accountability legislation that ends qualified immunity rather than a bill that explicitly codifies it or that the Supreme Court could construe as ratifying it.

The Supreme Court has made clear, time and again, that permitting individuals to recover monetary damages for constitutional violations serves two primary purposes: compensation and deterrence. With respect to deterrence, “[t]he knowledge that a municipality will be liable for all of its injurious conduct, whether committed in good faith or not, should create an incentive for officials who may harbor doubts about the lawfulness of their intended actions to err on the side of protecting citizens’ constitutional rights.”

Any proposal to expand employer liability only in cases of serious bodily injury and death would undermine the twin purposes of Section 1983, leaving victims of the most common forms of police abuse without a remedy whenever qualified immunity applies and leaving law enforcement without a corollary incentive to err on the side of protecting many rights. This approach would inexplicably leave behind cases challenging censorship, crackdowns on protests, illegal stops and searches, wrongful arrests, invasions of privacy, sexual abuse, interference with religious rights, seizures and destruction of property, discriminatory enforcement, and violations of other important constitutional rights.

Such cases are common. Consider a few examples that made recent headlines. In Columbia, South Carolina, a school police officer body-slammed6 a teenage girl at her desk and then dragged her across the classroom floor—because she was being disobedient in her algebra class. Courts and juries could easily conclude that the teenager has no recourse under a narrow employer liability proposal like the one being discussed by negotiators because her injuries were not permanent or sufficiently prolonged. In Chicago, as social worker Anjanette Young7 was getting ready for bed, police officers raided her home and forced her to stand naked before them for approximately 40 minutes—until the officers realized they raided the wrong home. Because the humiliation, violation of privacy, and invasion of her property did not involve death or serious bodily injury, this situation would not be covered by a narrow employer liability proposal like the one being discussed in the

Senate. In Pulaski County, Arkansas, an officer deliberately struck8 a pregnant woman’s car—causing it to spin out of control, strike the highway median, and roll over — because she slowed down and activated her hazard lights instead of immediately pulling over and stopping for him on a narrow shoulder. Luckily, neither the driver nor her fetus were killed — but that luck would bar liability for the police officer’s employer for his excessive force.

The proposed limits on employer liability that are being considered would have a particularly broad and severe impact on lawsuits challenging officers who violate the First Amendment and use excessive force during protests—like the officer misconduct that so many journalists, protesters, and bystanders experienced during last summer’s massive demonstrations against police abuse and violence, disproportionately against Black and Brown people. The narrow employer liability proposal would mean that law enforcement agencies would be shielded from liability whenever officers kidnap protesters while walking on city streets and bundle them into unmarked vans;9 unlawfully attack and arrest journalists,10 as well as legal observers and protesters;11 unlawfully arrest people trying to video-record12 public police activity; and unlawfully arrest people because the police are offended by the content of their speech.13 In situations where qualified immunity shields individual officers from liability, a narrow employer liability proposal, that only includes cases of death or the most serious bodily injury would mean that neither the individual officers nor the city or its police department could be held liable — meaning that no legal remedy would be available for these grave constitutional violations.

Proposed limits on employer liability would also deny a remedy to people when law enforcement officers unlawfully destroy or steal14 their property. Consider, for

12 Austen Erbalt and Marc Freeman, ACLU and Other Rights Groups Push for Case on Recording Cops to Be Reheard, Sun Sentinel (May 23, 2021), https://www.sun-sentinel.com/news/crime/fl-neaclu-woman-recording-police-20210524-plkzf4in35ey7es2kkb7rhrzme-story.html.

example, the case of Idaho resident Shaniz West.15 When driving home with her children, Ms. West saw five police officers surrounding her home, who told her that they were looking for her ex-boyfriend. She responded that she did not believe he was inside her home, but gave her house keys to the officers and granted them permission to enter. Instead of using the keys to open the front door, however, a police SWAT team undertook a six-hour siege of the house — which was empty except for Ms. West’s dog. When they received no response from inside the house, the officers bombarded it from the outside with tear gas grenades, breaking windows, punching holes into the walls, and permanently saturating everything inside with tear gas, rendering everything that Ms. West and her children owned unusable. The officers were granted qualified immunity. Under a narrow employer liability proposal like the one negotiators are considering, qualified immunity would protect the individual officers from liability, and the death/permanent injury limitation would protect the police department from liability, leaving Ms. West and her children with no legal remedy at all.

With respect to the goal of deterring future constitutional violations, a proposal limited to providing redress for constitutional violations that happen to result in death or serious bodily injury is indefensible. Courts would be unable to serve as a check on many of the most common day-to-day abuses of police power. And any deterrence would be uneven and random. An employee’s violation of the Fourth Amendment, for instance, would result in an employer’s liability, if the victim happens to die, while the exact same violation by another employee would not result in any liability if the victim gets “lucky.” That kind of policy is anathema to our system of government, under which law enforcement must respect and protect every individual’s constitutional rights in their entirety at all times.

Existing law treats violations of all of our constitutional rights equally and provides for remedies regardless of which rights law enforcement officers violate or how vulnerable the victim. Narrow employer liability proposals currently under consideration by Senate negotiators fail to treat all rights equally and would instead create a hierarchy of rights and a hierarchy of victims, in which only the violation of certain rights that result in serious physical injury or death are enforceable against police departments, leaving the rest unrealized.

If you have any questions, please reach out to Aamra Ahmad (aahmad@aclu.org) and John Langford (john.langford@protectdemocracy.org).

The Leadership Conference on Civil and Human Rights

National Council of Churches of Christ in the USA (NCC) 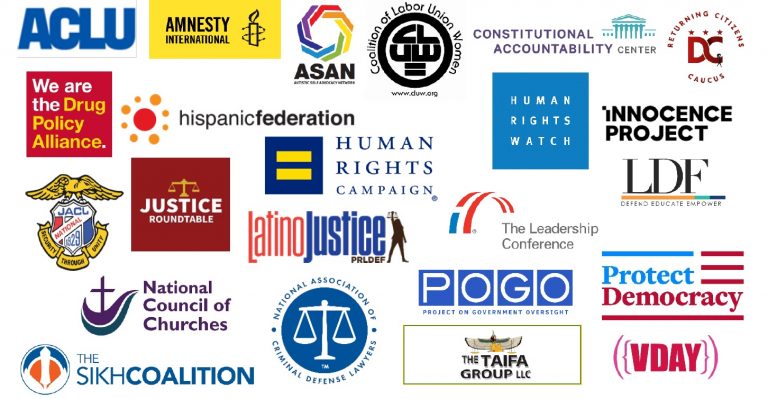